Tahchin (Tahchin e Morgh, ته چین) is a traditionally popular dish of Persian cuisine. “Tah” means bottom in Farsi which refers to the bottom of the pot. “Chin” is the imperative verb which means to place. So, Tahchin involves placing some items in the bottom of the pan.

The story of Tahchin’s invention is fascinating. Hundreds of years ago in one of the gentry houses of ancient Iran, the master noticed an argument among servents.

Tahchin is an official dish, and it is mostly served in important ceremonies such as wedding parties. You cannot find it in every restaurant easily, it is available at fancy restaurants, only.

In home-made Tahchins there is a thick layer of white Polow on the mixture at the bottom of the pot. However, in restaurants, they only serve the base part.

Rice, yoghourt and saffron are the fixed ingredients. According to the other components that we add to rice, different kinds of Tahchin is created. Tahchin e Morgh which we add chicken and barberries to rice, is the most popular. To name other types of ingredients that are typical to add to rice and cook Tahchin, I can mention lamb, beef, eggplant, spinach and fish. 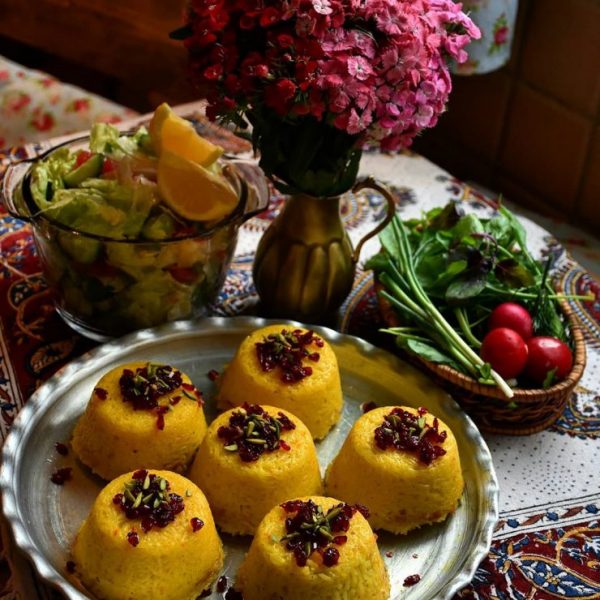 Tahchin e Morgh which is a combination of chicken, rice, saffron and yoghourt have 200 kcal per 100 gr serving. It has about 22 mg carbohydrates and about 10 mg protein.

Like much other rice-based dishes, it is an excellent source of all kinds of vitamin B. it also has other vitamins such as vitamin A, K, D, and E. 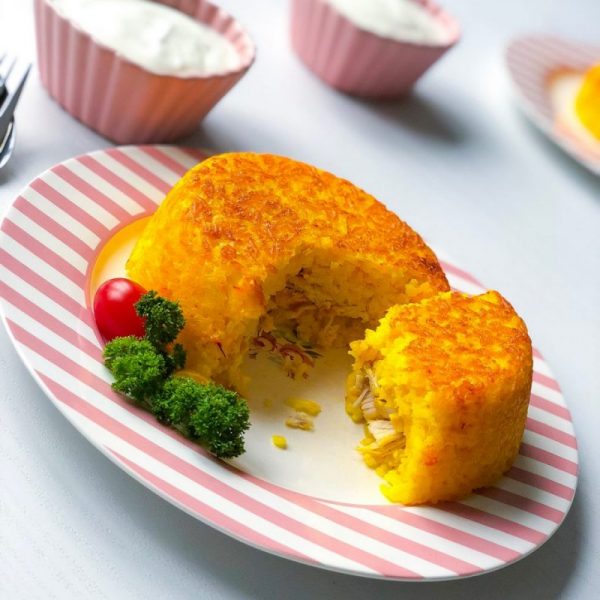 Tahdig is served as a main course for dinner or lunch. Usually, a light soup such as a saffron soup or barley soup is a wise choice for an appetizer before this dish. Side dishes next to Tahchin are Sabzi khordan, Lettuce salad, Salad Shirazi and Torshi.

Any drink is welcomed next to Tahchin but like the majority of other Persian dishes, Doogh (Persian yoghourt drink ) best accompanies this food.

The main ingredient of this dish is rice, which has a vegetarian source. You can add vegetarian yoghourt and other vegetarian ingredients such as eggplant or spinach instead of meat. Eggplant and mushroom are the most popular vegetarian Tahchins.

The main ingredient is rice. We add some other ingredients depending on the type of Tahchin.

Other ingredients are mostly, chicken, saffron, yoghourt and barberries. Of course, the dish made out of these ingredients is Tahchine Morgh(chicken), but Tahchin can have other main ingredients such as lamb, beef, eggplants, etc.

To cook this food, you have to cook the chickens separately with an onion and some water. You should prepare the rice in a polow style. After you rinsed the softened boiled rice, you mix it with a unique mixture. This mixture includes eggs, distilled yoghourt and oil. Then you pout them into a pan and cook and fry it. You can decorate your dish with barberries and sliced pistachios. 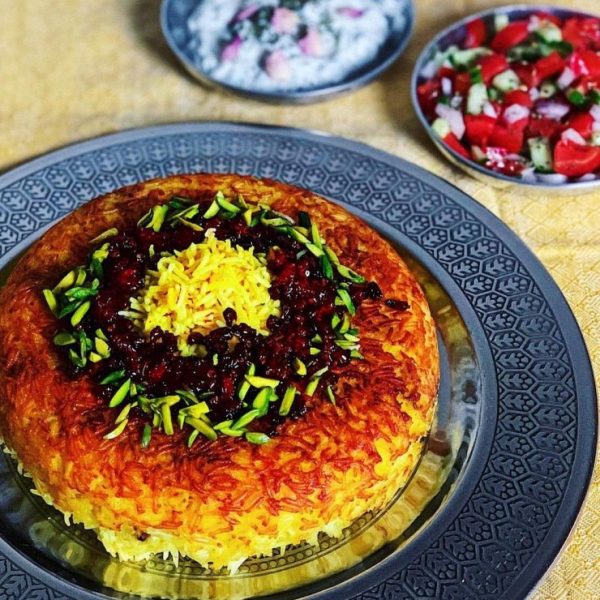