Sosis Bandari (سوسیس بندری) or spicy Persian sausage is a Persian style of cooking sausages. This food was invented in one of the northern ports of Iran, called Bandar Anzali when the first sausages made their path to Iran. However, soon this food was trendy among southern port residents, and they made notable changes in the recipe. Nowadays, the word Sosis Bandari symbolizes the Southern Iranian port. Sosis is the Persian word for sausage, and Bandar means port in Farsi. The food’s name means sausage from the port. Bandar, in this term, symbolizes Babdr E Abbas, one of the southern ports in Iran.

Iranians who live in the south of Iran mostly eat spicy and hot foods. Maybe it is related to their hot and humid climate. Or perhaps it is because of their low distance with indies who are the pioneers of cooking and eating spicy foods.

Indeed, there is only one kind of Sosis Bandari available. However, the flavor can be different according to the type of sausages or the spices you use in cooking. Moreover, some people add fried diced potatoes to this dish, and some others don’t. The most common type of it is made out of Cocktail sausage and diced onions and potatoes along with some chili and hot spices. A mixture of all the mentioned ingredients makes fabulous stuff for a sandwich. Iranians usually, put the mixture inside baguettes and make a sausage sandwich.

Honestly, everyone knows that sausages are not rich in nutrition. Moreover, if you care about your fitness, you’d better eat less of this food. Sosis Bandari has about 180 kcal per 100gr. Since it is always eaten with baguettes, the calorie of the baguettes is added. It has about 12 gr carbohydrates and 4 gr protein per 100 gr. Indeed, it is a portion of junk food that you can enjoy limited times a year, just because it has a delightful taste. 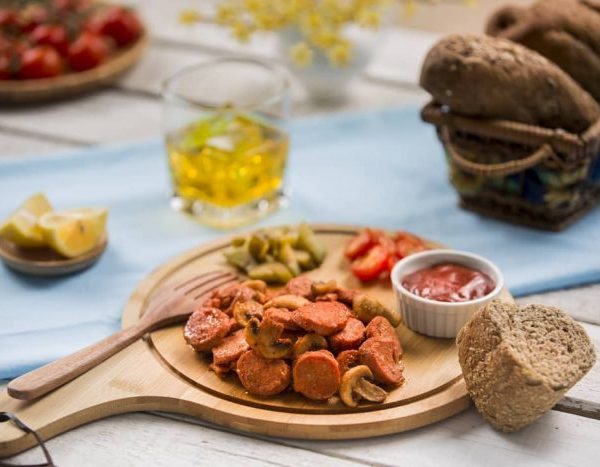 Fortunately, Sosis Bandari is not dependant on ingredients. In other words, this food is a matter of the method; we use to make it, not a matter of the sausage itself. Therefore, vegetarians can cook it very easily just by replacing the Cocktail sausage to a vegetarian tip of their taste. Moreover, if you are vegan, you can do the same thing, replace the sausages with a vegan type. Then follow the recipe. Other ingredients, including onion, potatoes, and spices, all have vegetable sources.

Iranians usually serve this food like a sandwich. In other words, Sosis Bandari Sandwich is very popular in Iran. They serve it as the main course or as brunch. You can see it at many breakfast serving restaurants and hotels as a breakfast item on the menu. Moreover, you can cook or buy a sandwich for dinner or lunch. Pickles, especially Persian type (Khiarshoor) and some Torshi like Liteh, are some choices you can have next to this food.

Soda drinks such as coca-cola or soda Doogh(Persian yogurt drink) are the best choices of drink next to this sandwich. 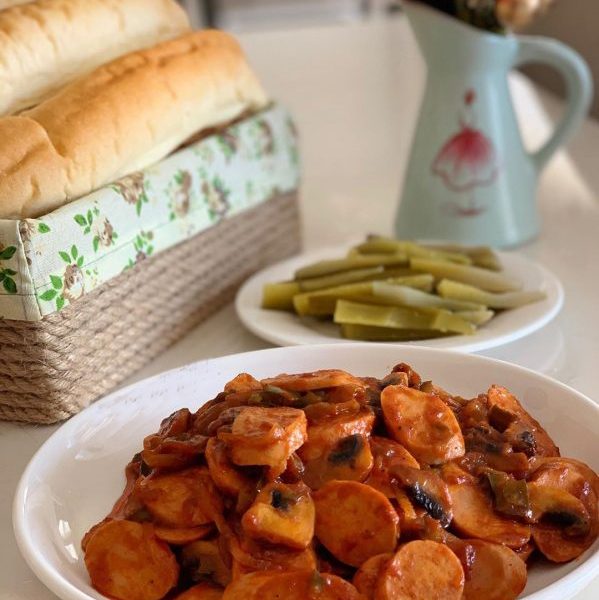 What are the ingredients of Sosis Bandari?

To cook Sosis Bandari, you need to slice the sausage in circles. You can also dice the sausages. Then you fry them with some oil. While the sausages are cooking, you need to fry the sliced onion in another pan. Moreover, you need to dice and fry the potatoes. If you want to use one pan only, first fry the sausages, then fry the potatoes, and finally fry the onions and add the sausages and potatoes to them. You can add tomato paste and spices to potatoes or the onions while frying. At last, you mix them well and adjust the hot taste to your favor. You can either serve the stuffing and bread separately or fill the slices of bread and serve the food like sandwiches.

This recipe is adequate for four people. The preparation time is 20 minutes, and the cooking time is 30 minutes. You need to prepare some slices of bread to serve this food like a sandwich. 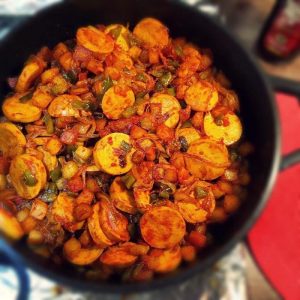