Sohan (Soohan, سوهان) is a traditional Persian delightful sweet from Qom, one of Iran’s central provinces. It has a crunchy texture and a moderate sweet taste that creates an excellent combination with nuts that they put inside it. You may have heard about Sohan by the name Persian saffron brittle. The first Sohan was originated in Qom during the Qajar Empire in Iran. In the historical texts, they have referred to Sohan as a kind of Persian Halva that people of Qom make with wheat and butter.

However, soon after it paved its way to other cities, such as Isfahan, Kerman, and Zartond. Nevertheless, the most popular Sohan still belongs to Qom, and it also has more varieties there. Sohan can be used in both official and unofficial gatherings, but they never serve it in wedding parties or funerals. It seems like it is a proper sweet to be served at small gatherings. You can use it instead of Ghand (Persian cube sugar) next to the tea. It is the best souvenir of Qom that you can easily find I Qom’s confectionaries and gift shops. Nowadays, it is available in other cities, too.

There are different varieties of Sohan available in Iran. Sohan e Kareyi (the one with butter) is the most famous and original one from Qom. There are other types of it, such as Sohan Asali, which has been originated in Isfahan, and it is made with almond and honey. Sesame Sohan is another type that is made with sesame seeds and honey. Other types of it include Almond, Gaz, and Pashmak. Moreover, there are two different types of Sohan in Qom shape wisely. There is a pure one which is a circle sweet that has nuts as topping or Loghmeyi which is smaller and has the nuts as stuffing.

Sohan is made with wheat and butter mainly. Therefore, it has a high calorie of 500 kcal. It has 8 gr protein, 60 gr carbohydrates, and 25 gr fat per 100 gr. Since the main ingredient is wheat, it contains all the varieties of vitamin B. it also includes, vitamin C and some vitamin E. Moreover; it consists of some essential minerals, such as magnesium, sodium, and potassium. However, if you have diabetes or your blood cholesterol is high, you should never eat this sweet. 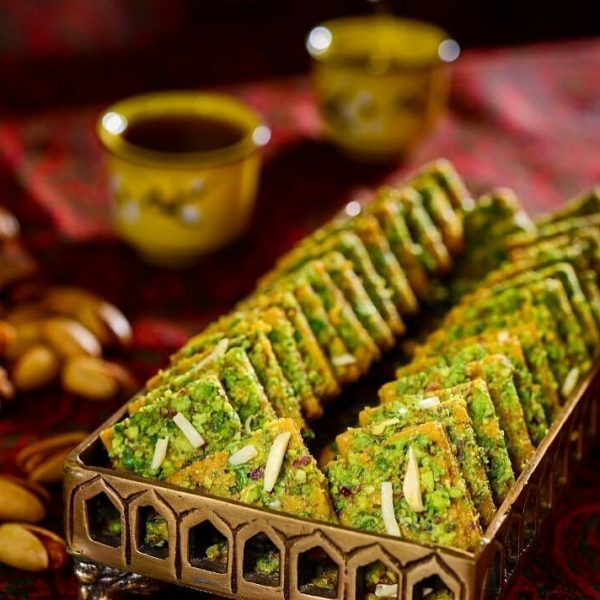 Persian sweets do not contain any animal-sourced ingredients. Therefore, they are a great choice of dessert and sweets for vegetarians and vegans. The only ingredient that you might need to change in this recipe is butter. You can add vegetable oil instead of butter. The primary ingredient is wheat.

Iranians serve sweet pastries on happy occasions from a wedding party to a small happy family gathering. Commonly they serve black Persian tea along with these sweets, which helps to make the taste more delightful by moderating the sweet taste. If you are going to use Sohan as a sweet in hosting a Persian ceremony, I strongly recommend you to use Sohan Loghmeyi (the square ones with nut’s stuffing). To serve them, place them in a beautiful dish and serve them along with tea. It can be a tasty dessert or a starter in the small gatherings. If you are serving it at an evening party, a dish of fresh fruits can well accompany it. 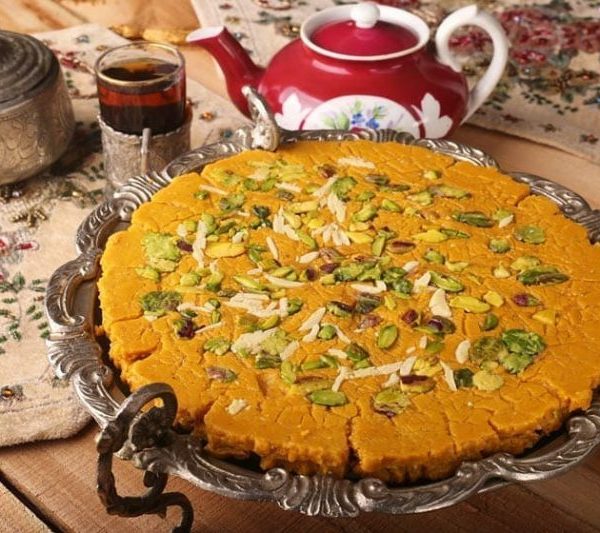 What are the ingredients of Sohan?

The main ingredient in cooking Sohan is wheat. It would be best if you had pure wheat and some wheat ground. Moreover, you need to prepare proper amounts of water and butter. If you are a vegan, you can use vegetable oil instead of butter. Sugar and honey are the components that you need to sweeten this pastry. It would be best if you also had some spices such as cardamom ground, salt and saffron. Some nuts, such as almonds, pistachios, and walnuts are required as the topping. You can either use one type of them or a mixture of them to your taste.

How to cook Sohan?

Mix wheat flour, wheat ground, and sugar in a pot and heat them for 3 minutes. Batter them during heating to avoid burning. Then add water and mix the combination to the point that sugar solves in the water. Then add the butter or vegetable oil and wait until it melts. At this point add honey, cardamom ground, then add salt and brewed saffron. Note to heat the mixture to 260 ‘C. after the dough heated to that point, add almonds and pour the dough on porches in circle shapes. Wait until they get dry, brittle and crunchy.

This recipe is adequate for about 16 people. The preparation time is 10 minutes, and the cooking time is 20 minutes. 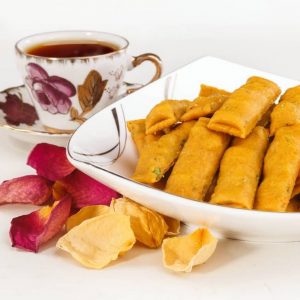 You ‘d better use a cooking thermometer to measure the temperature of the mixture because heating the dough more or less than 260’C is an essential point.