Sangak (Sangak bread, Naan Sangak, سنگک) is a traditional, Persian flatbread. Naan is the Persian name of bread that is integrated into the culture of Persian people deeply. There are several types of flatbread, which you can see on every Persian family table, and it is consumed with breakfast, lunch, and dinner meals. One of these flatbreads is “Naan Sangak,” which is truly unique in its type. Its baking techniques and its flavor are exceptional.

Naan Sangak dates back to the period of Sassani before entering Islam to Iran. One of the famous characters of that time was named “Sheikh Baha` I” had invented Naan sangak`s baking method. Naan Sangak is a large and thick bread with almost the length 3 feet, width 1 feet, and thickness 9mm.

Naan Sangak has gotten its name from its baking technique, which is baked on the surface of hot stones, small rocks, and pebbles. These little rocks and pebbles are called “Sang” in the Persian language. Si Naan Sangak means little rocks in Farsi.

In this method of baking bread, a layer of dough is drawn on the hot surface of stones. So you wouldn`t be surprised if you find some pebbles stuck to this bread. These small rocks make the bread`s indented and uneven surface.

Different types of bread can appear on the Persian table, which Naan Sangak is one of them that the raw material of them is almost the same. So we have a variety of loaves of bread that have different names depending on their baking methods and some of their sub materials. The only thing that we want to mention here is that Naan Sangak can be served pure. But sometimes some people like it with sesame seeds on its top, which makes it more delicious.

Some people believe that baking Naan Sangak on hot stones improves the quality of this bread and keeps almost all its properties, we should mention that Naan Sangak has the highest quality and energy amount other kinds of pieces of bread. If you want to regard the calorie count, a part of it, as big as the palm of a hand, would have 75 to 85 kcal of energy. It means that it has not high calories, and it would be the right choice for losing diet. Naan Sangak has a high value of vitamins, minerals like calcium and iron and protein, because whole wheat, all-purpose flour, and sourdough starter are used to its baking process. So it is very beneficial for children in their nerve cells growing. Naan Sangak is also easy to digest because it contains a high amount of fiber content in its material. 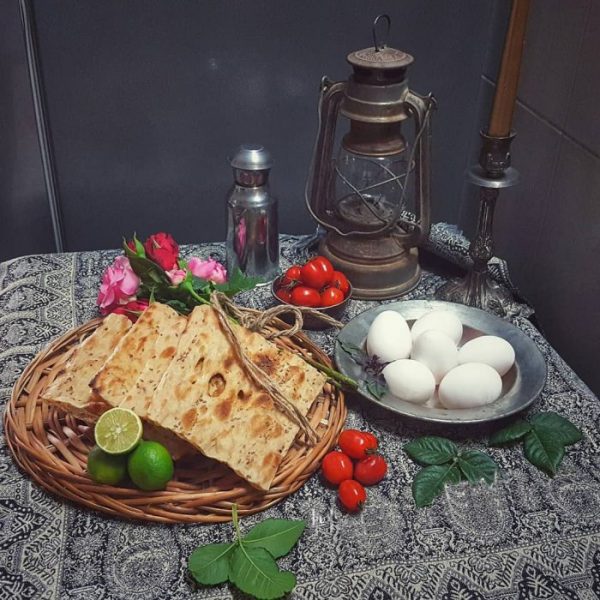 All kinds of slices of bread, as Naan Sangak, in Persian recipes are available and suitable for vegetarians and vegans since all its row materials have a planet base like wheat flour, water, sugar, salt, and oil.

This traditional bread is very popular and suitable for breakfast. Also, Naan Sangak is served with a variety of Persian dish which is not served with and kinds of rice like polo, Chelo, and pilaf. The most important meal that Naan Sangak, are served along with them ate Abgosht (broth), Kofteh (meatballs), Kebab, Dizi, and Kalepacheh (stubborn).

If Naan Sangak is served hot, it would be more pleasant. So if it gets cold, you could reheat it in the microwave. 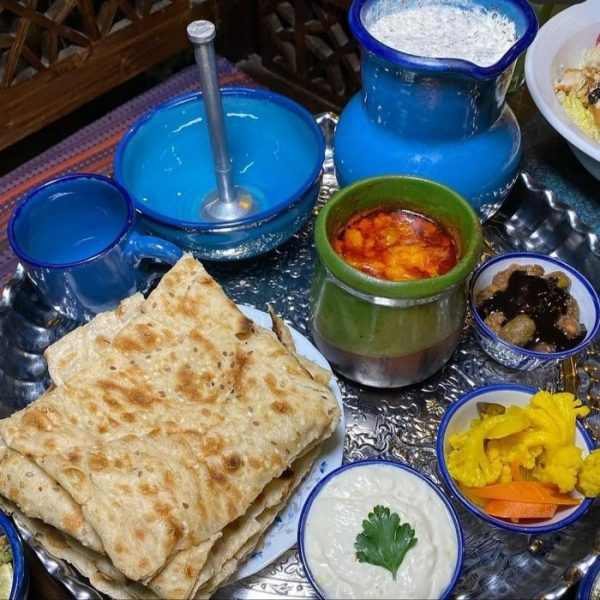 Between all kinds of loaves of bread, Naan Sangak`s ingredients are unique and so they make this bread high quality. Its ingredients contain sourdough starter, whole wheat flour, all-purpose flour, sugar, salt, oil, and water. Sometimes you can also use sesame seeds for dressing its surface, which makes a pleasant taste, too. One of the essential materials which you need to bake that is small rocks and pebbles.

The preparation time of this type of Naan is almost 10 min. It also has a short time of cooking. It approximately lasts 10 min, too. But this process needs a resting time of 12 hours that make it be an overnight process. First of all, you need to combine the sourdough starter, sugar, water, and flour. After mixing the ingredients, it requires almost 1 hour to rest at room temperature. You shouldn`t knead the dough, and it just needs to rest. Then you have to add its salt, oil, and additional water, without squeezing the dough. After that, you should stretch and fold the dough to itself several times with a rest of 30 min.

After this level, it needs to be refrigerated all over the night. Before you start to bake Naan Sangak, after removing it from the refrigerator, it needs to be left at room temperature for almost 1 hour. At the end step, you need to preheat your oven and your pebbles and start to lay your shaped dough on the stones with a tray and let it cook for 8-10 minutes. Finely you can remove your baked bread and served it.

This recipe is adequate to bake two average Sangak bread. The preparation time is about 1.5 hours, and the cooking time is 30 minutes. 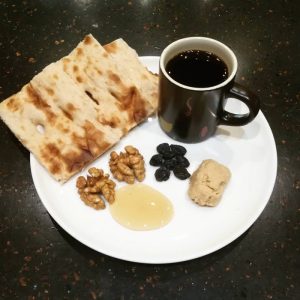