Poolaki (Pulaki, پولکی) is a traditional Persian candy from Isfahan. Isfahan has been one of Iran’simportant capitals for several years. Therefore, this city has a rich history and culture. After Gaz, Poolaki is the most famous sweet souvenir of Isfahan. According to historical pieces of evidence like Gaz, this sweet also originated during Qajar empire. Some historians believe that Indian merchants transferred this candy to Iran. Poolak in Farsi means little money (coin). They named this candy because it looks like coins.

It has been about two centuries or more, that, Isfahani people, use this candy next to their teas. Although this candy soon paved its way to other cities of Iran, too, it is not much prevalent in other cities. In this article, I am going to discuss Poolaki, which you may have heard about by the name Persian saffron candy. If you are a Persian cuisine lover, or you drink a lot of tea, I recommend you to read on this post.

If we travel back in time, we would see Iranians making Poolaki with a limited number of ingredients. That type of candies had a clear white colour and didn’t have any particular flavour. Indeed, we can say that they were only some sweet white circles. As time passed, the creative chefs of Qajar cuisine started to add flavours to this candy. The first flavour that every Persian would use in food is saffron. Therefore, they started making saffron Poolakis which not only enhance its taste but also caused it to look like more gold coins.

The next generation of these candies had sesame seeds as a garnish inside them, which made them more delicious. They tasted like Sohan Konjedi (sesame Sohan). As the industrialization developed and humans learned to add anything’s essence to every food, the types of Poolaki increased. Nowadays you can find this candy with plenty of flavours, including ginger, cinnamon, rose and all fruit essences in Isfahan confectionaries. Moreover, nowadays, they make these candies in different shapes such as rectangles, and they are not limited to a circle shape.

100 gr of Poolaki has about 313 kcal. It has 1.7 gr fat, 0.6 gr protein and 74 gr carbohydrates. Compared to Ghand (Persian sugar) it is a better option to drink tea with it. It has some varieties of vitamin B and some other essential minerals and vitamins. The notable point is that Poolaki usually, contains saffron which is very beneficial for the body. Therefore drinking tea with it can be useful. Moreover, since it is made in very thin and small sizes, it contains a low-calorie while serving. Even if you have diabetes or high blood pressure, you can use one of these candies.

Poolaki is a Persian candy which is utterly made with vegetarian ingredients. As a vegan or vegetarian, you can confidently create and use these candies. It is an excellent choice for serving and consuming next to the tea.

Iranians usually serve Poolaki next to Persian tea to drink the tea with it. Since Iranians drink tea almost every time of the day, they serve it whenever they drink tea. It is not that sweet to use for starter or dessert. You should think about it as a replacement for sugar while drinking tea. To serve Poolaki in a party, pout some of it in a small bowl-like dish. If you have different flavours of it, pout them separately in different containers. You can also serve some rose petals and cinnamon sticks to drinking with tea. They can help to increase the quality of decoration of your tea table. 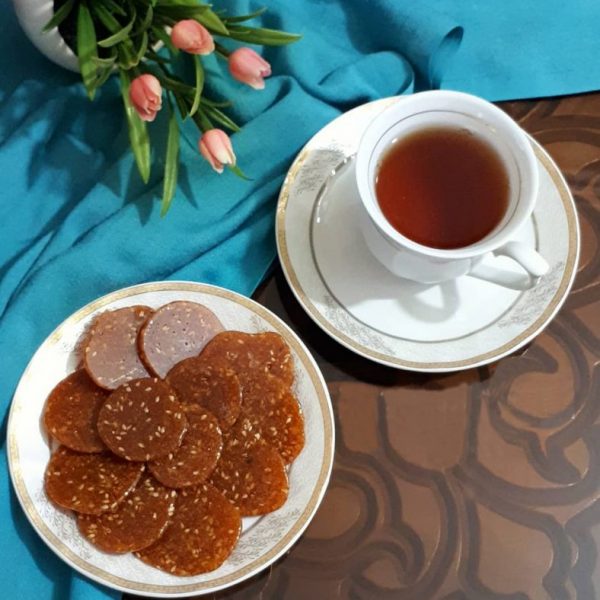 What are the ingredients of Poolaki?

Poolaki is one of those sweets which you can make with the most handful of ingredients. The pure, simple saffron flavoured Poolaki has only four components. The main ingredients are water and sugar. The auxiliary ingredient that will help us in making the candy’s texture is vinegar (grape vinegar). Finally, it would be best if you had saffron to have a saffron flavour candy.

Maybe, I can claim that this is the easiest recipe of Persian cuisine. The only thing you need to do is to mix water, sugar and vinegar and heat them. You even do not have to batter them while heating. After 15 minutes turn off the heat and pour a tablespoon of it at a time on an aluminium foil. After 15minutes that they are solid and brittle, they are ready to use.

This recipe is adequate for four people. The preparation time is 2 minutes, and the cooking time is 15 minutes. 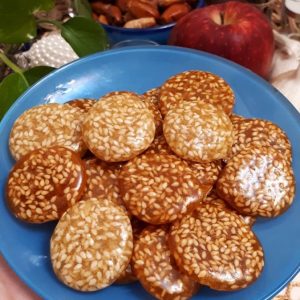