Persian Tea (Iranian tea, Chay, Chayi, or چای) is a hot drink, which Iranians use a lot. The history of drinking black tea in Iran refers to the 17th century. Many historians believe that the history of drinking tea in Iran refers to 200 ac. It is not precisely clear when did Iranians were introduced to the current type of drinking tea. Since Iranians didn’t cultivate it themselves, historians assume that Mongolians brought tea to eastern Asia in the first place. Nevertheless, some historians claim that it was Amir Kabir who made tea famous in Iran during the Qajar period.

Amirkabir founded a “Samavar” factory in Isfahan. He had got the certificates of manufacturing these especial teapots from France. Before that time, Iranians used to drink coffee. A special kind of brewing coffee was typical in Iran. Nowadays, there are no pieces of evidence about how they made coffee in Iran and what was the Persian coffee-like. Nowadays, Iranians drink tea. They drink tea so much that I can claim, tea is not just a drink in Iran; It is a lifestyle! They brew and drink tea everywhere and every time of the day. Out there, in the streets, you can easily find a cup of tea everywhere. In the shops (any kind of shop), in the parks, in the newsstands, and even in taxies!

Persian people use tea, to host their formal and informal parties. You may go shopping in the bazaar, and a shop keeper might serve you tea while you are buying a carpet. You may go to a tax agency, and the clerks may serve you with a cup of tea while you are waiting for the process. If you enter an Iranian house, the first thing you’d be served is a cup of tea. Make a long story short; tea is the essential drink in Iran; they drink it even more than water.

Who is the father of Persian tea?

It is about 5000 years that people all over the globe cultivate tea. In the 12th and 13th centuries, Chay or tea entered Iran as a medical liquor. For many years after that, Iranians knew tea as a therapeutic beverage, and coffee was their regular drink. During the 17th century, Agha Mohammadkhan Ghavanluye Qajar becomes the minster of the Iranian embassy in India. There he learns about tea cultivation and black tea. At first, he decides to import tea from India. For many years Iranians import tea from India through their southern ports. Then they start to cultivate this excellent herb in the north of Iran because there was more like India climate-wise.

So far, Lahijan’s tea is the most popular and qualified black tea in Iran and even in eastern Asia. Lahijan is a small city in Gilan province near Rasht. In the countryside of Lahijan, many country people do tea cultivation for their living.

Of course, there are different types of tea available everywhere: green tea and various types of fruit teas, such as berry tea. Or even different spices tea, like ginger or cinnamon tea. But when we are talking about Persian tea, we mean the black tea, that Iranians brew unusually. They mostly use unique pots called Samovar, which is probably a Russian term for this pot. However, the historians claim that these pots have paved thor ways to Iran from France. They also use teapots. You may experience different te tastes according to the type of tea and the method of heating the water to boil. 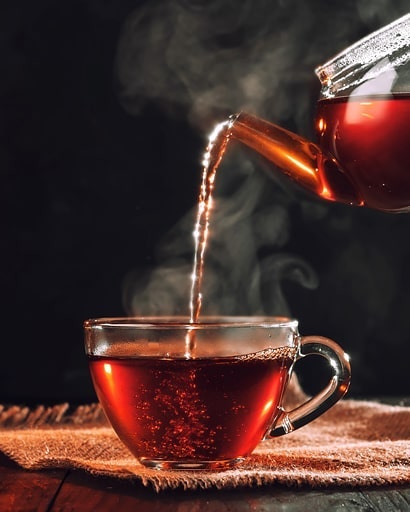 We can claim that Persian tea has no calories. However, since Iranians drink it with sweet things such as cubed sugar, Nabat, or some pastries, they add some calories. Nevertheless, you can drink it with no sugar; it is not bitter like coffee. Chayi has a notable amount of caffeine, but its caffein is less than coffee. It is an excellent source of antioxidants. A cup of Iranian tea can energize your body and brain while supporting your immune system.

Whether you are a vegetarian or vegan, you can brew and enjoy Persian tea as well. It doesn’t have any animal sources. It is all herbs and water. 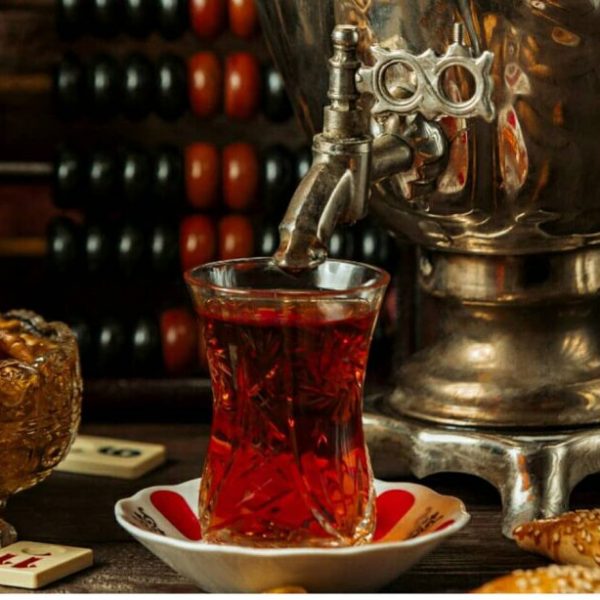 Iranians serve tea, almost everywhere and every time from funerals to wedding parties. On casual birthdays or important federal meetings, they serve Persian tea. In breakfast, as a brunch and most of the time, it is the first choice for a drink. Persian tea is served hot. They brew it in Samavar and teapot and serve it in cups. Always something sweet is served next to the cup of tea to sweeten it while drinking. This sweet item is a date in funerals and cream cakes at weddings. In regular daily use, they utilize cube sugars. Nabat(a kind of Persian sugar) best accompanies Iranian tea. ChayiNabat (tea+ Nabat) is an excellent combination in Iran.

You can also serve some cinnamon sticks, dried rose blossoms, or some lemons to let your guest change the taste. It is an excellent drink next to pastries.

What are the ingredients of Persian Tea?

The ingredients are only black Persian tea and water. You can add some spices such as cinnamon or ginger, to taste it up. However, the original flavor should be brewed using only water and tea. And be served with cube sugars.

How to brew Persian tea?

To brew a qualified Persian tea, you should boil water. Pour some water in a pot or likely in a Samovar and wait until it boils. Then pout some black tea in a teapot. Pour tablespoon water on the drink and rinse it to wash the tea. Then pour boiled water on the black tea in the teapot and put on the Samavar or the pot with the boiling water. The steam and vapor cause the tea to brew. It is essential to let it brew on the water vapors for at least 30 minutes. 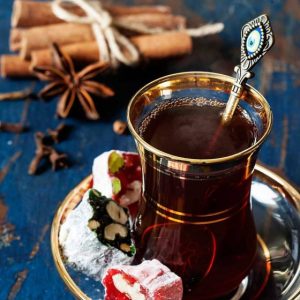 Persian tea is a black tea that Iranians brew in a unique method. Persian people serve it every time and everywhere. It is the most favorable drink in Iran.
No ratings yet
Print Pin Rate
Course: Drinks
Cuisine: Persian
Keyword: Persian tea
Prep Time: 30 minutes
Cook Time: 30 minutes
Servings: 4 people