Khoresh Bademjan (Persian eggplant stew, Khoresh Bademjoon, or خورش بادمجان) is one of the famous and traditional Persian stews. It is made with eggplants and meat. It is somehow like Gheymeh Bademjan without split chickpeas and minced meat. Although it is claimed that, Tehran is the city, where this food was originated in the first place. But, some historians believe that this food is from the north of Iran. That is because people in the north of Iran use a lot of eggplant in their foods.

Although one might wonder that eggplant is not the right choice to make a stew, it is. The fried eggplants that marinate in a special sauce made with tomato paste and some other spices that cook along with lamb make a very delightful taste. Eggplants are a great source of iron for the body. In the past, many doctors in Iran advised people to consume eggplants to avoid ammonia. Maybe that is the reason for using eggplant in Persian cuisine, more than others. Iranians serve this food in gatherings such as dinner parties. It is considered a formal dish, but they don’t serve it in wedding ceremonies or funerals. You can find it in classic restaurants in major cities. In the north of Iran, you can find it almost everywhere.

Khoresh Bademjan is referred to as fried eggplants marinated in a special sauce and cooked with meat. The type of meat can vary according to your taste. They cook it with lamb, beef and chicken. The most typical meat used in the Khoresh Bademjoon is lamb. Moreover, there are some different types of garnishes that some people add to the dish. For example, you may see Khoresh Bademjoon Ghooreh, which has sour grapes inside it added to the main ingredients. Or in some regions, they add walnut to the dish and make Khoresh Gherdoo Bademjoon. You may have heard about Khoresh Gheymeh Bademjoon which seems to be similar to this stew, but it is not. Because Gheymeh Bademjoon has split chickpeas as the main ingredient and the meat inside it is minced.

Khoresh Bademjan has 121 kcal per 100 gr. It contains 6 gr protein and 6 gr carbohydrates per 100gr. Next, It has a notable amount of 86 gr water. Moreover, It contains almost all of the vitamins. It has 26 mg of vitamin C per 100 gr. It has 560mg sodium, 456 mg potassium and 246 mg phosphor. Furthermore, It is also a great source of iron and other essential minerals. You should add the calorie and nutrition of the rice to these amounts since it is eaten with Polow. 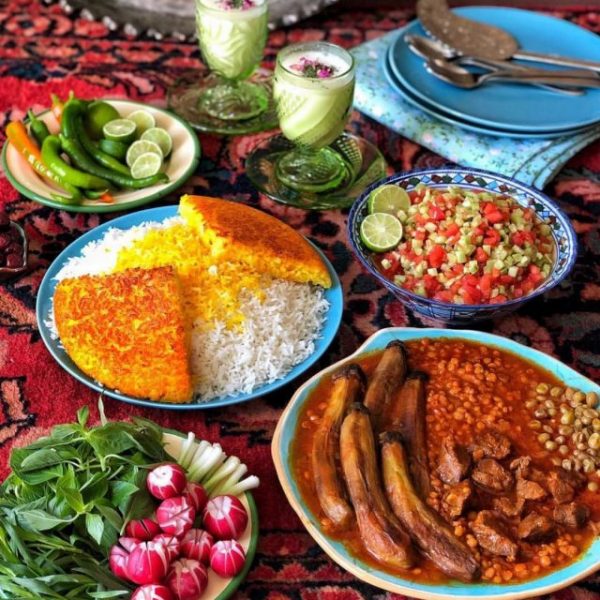 The only non-vegetarian ingredient of this food is meat! You can easily omit the meat from the recipe. I recommend you to make a dish of Khoresh Ghooreh Bademjoon(fried eggplants with sour grapes) if you are a vegetarian or a vegan. It can be one of the most delicious and nutritious full vegetarian dishes of Persian cuisine. Moreover, Iranians serve this stew with a dish of steamed rice that has a vegetable source, too.

Iranians serve Khoresh Bademjan with a dish of rice as the main course for dinner or lunch. A cup of Saffron or Jou soup can best accompany this food as an appetizer. You’d better avoid serving the eggplant based side dishes or appetizers along with eggplant stew. For example, Kashk e Bademjan is not a wise choice for an appetizer before eggplant stew. A dish od Salad Shirazi (Persian cucumber salad), Sabzi Khordan, Torshi, and Zeytoon (olives) can be served as side dishes. For a drink next to this food, Doogh (Persian yogurt drink) is the best choice. However, you can serve it with any beverage to your taste. 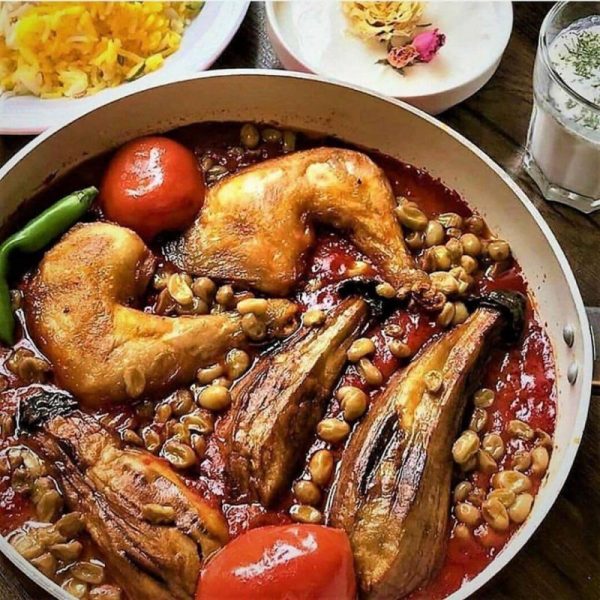 What are the ingredients of Khoresh Bademjan?

The main ingredient is eggplant. Because except eggplant, all other ingredients are replaceable with other components. Another element is meat, which can be lamb, beef, or chicken to your taste; you can also omit the meat. Other essential ingredients are tomato and tomato paste because you need them to make a delicious sauce.

Moreover, some spices such as turmeric and saffron are necessary to make the taste. You can add some components as garnishes, such as sour grapes (Ghooreh) or walnuts. You are going to serve this food with a dish of rice, so Persian or Basmati rice is considered as an ingredient here.

How to cook Khoresh Bademjan?

To cook Khoresh Bademjoon, first, you should fry some onions. Then you add the cubed beef to the sauteed onions and let them cook with some water and spices. The spices you’d better add are turmeric, salt, and pepper. You need to extract eggplant’s bitter taste. To do so, you can slice the eggplants and then pour salt on them. After one hour if you rinse and dry them, the bitterness is completely extracted. Then it is time to fry the eggplants. It would be best if you also made a sauce. To make the sauce, you need to saute tomato paste with butter and then add the cooked meat with the gravy into it. In the end, you place the fried eggplants inside the meat sauce. You can add the garnishes at this point.

This recipe is adequate for four people. The preparation time is about one hour and the cooking time is three hours. It would be best if you prepared a dish of Polow to serve with this stew. 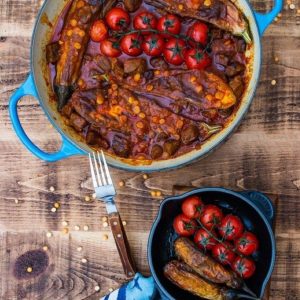 Khoresh Bademjan is a Persian eggplant stew that is made with fried eggplants, meat, and some other ingredients. They usually serve it along with a dish of rice such as Kateh or Polow.
No ratings yet
Print Pin Rate
Course: khooresht ( Stew )
Cuisine: Persian
Keyword: Khoresh Bademjan, Persian Eggplant Stew
Prep Time: 1 hour
Cook Time: 3 hours
Servings: 4 people
Calories: 121kcal