Shish means skewer and Lik probably comes after that to show the stuff attached to it. Overall, Shishlik means the kabab attached to the skewer. Shishlik is a popular Kabab in Iran, Azerbaijan, and Russia. In Iran, you can find it in almost every classic restaurant’s menu. It is typically the most expensive dish of the classic restaurants in Iran. In Azerbaijan, you can find it as a snack even served next to the street. Commonly it is made with lamb. However, according to cultures and religious beliefs, the meat can change to beef or pork. In this article, I am going to discuss the Persian Shishlik, which is made with lamb’s rib. Again according to religious beliefs and culture, they may marinate the meat of Shishlikh Kabab in different ingredients such as wine or vinegar. It is a very official food for Iranians, and they serve it for extraordinary guests and at very special ceremonies.

The primary type of Kabab Shishlik is the one which Iranian chefs make with lamb ribs. Sometimes, they also make other types of Shishlik by attaching a layer of lamb and a segment of the fat attached to the meat. In some regions, such as Azerbaijan, they do not necessarily use the rib. They use any part of the lamb. Moreover, in Russia, they make it with pork and marinate it in the vine. However, in Iran, they typically make it with a lamb rib and marinate it with vinegar and some other Halal components. 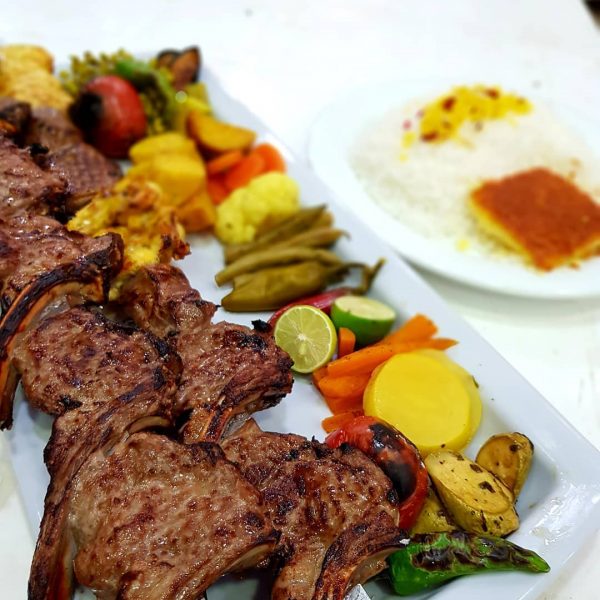 Indeed, we cannot talk about vegetarian and vegan diets and Persian Kababs at the same time. Unfortunately, there are no tips to make Kabab Shishlik or any other Persian kebab vegetarian. You ‘d better ever mind eating Persian kebabs as a vegetarian.

Iranians serve Kabab Shishlik with Chelow as the main course for dinner or lunch. Since it is usually served at restaurants, a cup of soup (typically soup e Jo) is served as an appetizer before the Kabab. A dish of Salad Shirazi, lettuce Salad, or a cup of yogurts such as Mast o Khiar or Mast o Moosir can be the side dishes. In some restaurants, you can find Sir Torshi (Persian garlic pickles), as another side dish. All drinks including water, soda, Cola, and vine are welcomed next to Kabab Shishlik. Nevertheless, Doogh (Persian yogurt drink) is always the best beverage to serve next to Chelow Kabab. For a fancier serving, I recommend you to prepare some Persian Baklava and Persian tea as dessert after Chelow Kaba Shishlik. 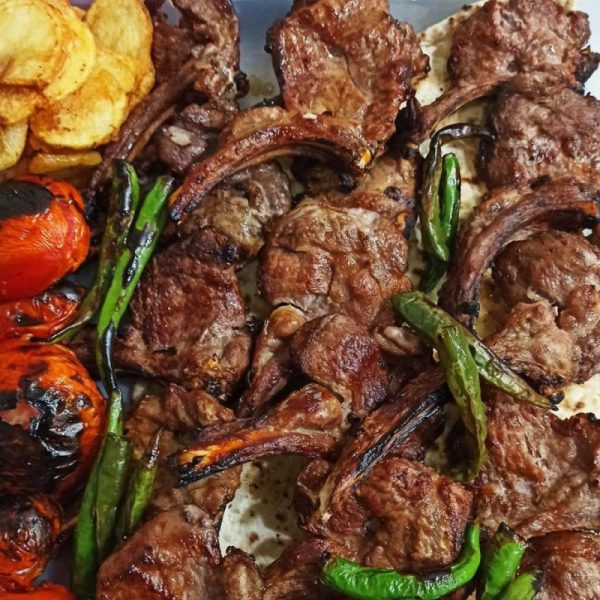 What are the ingredients of Kabab Shishlik?

The main ingredient is lamb’s rib. You need to prepare at list four ribs per person. It would be best if you also cooked rice to serve the kabab with Chelow. Moreover, it would be best if you had wide skewers to make this kebab. If you do not have wide skewers, you can use two narrow skewers. You also need some other components to marinate the meat—components like onions, vegetable oil, saffron, butter, and some spices such as salt and pepper.

How to cook Kabab Shishlik?

To cook Kabab Shishlik, you should first, marinate the ribs. To do so, prepare a sufficient container, shred the onions and pour the onion’s juice on the ribs. Add some lemon juice and vegetable oil to the ribs. Add salt and pepper and mix the ribs well with the juice and keep it in the fridge for about 12 hours. This marinating will soften the ribs and taste them up. Make a sauce with melted butter and saffron, and brush the ribs while cooking them on the barbecue.

This recipe is adequate for four people. The preparation time is about 12 hours, and the cooking time is 30 minutes. It would be best if you prepared a dish of Chelow to serve the Shishlik with it. 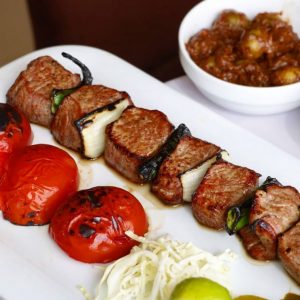 Kabab Shishlik is one of the most delicious and most expensive Kababs of Persian cuisine. It is made with lamb ribs that are marinated in particular ingredients.
No ratings yet
Print Pin Rate
Course: Main Course
Cuisine: Persian
Keyword: Kabab Shishlik
Prep Time: 12 hours
Cook Time: 30 minutes
Servings: 4 people
Calories: 388kcal