Kabab Barg (Kabab e Barg, کباب برگ) is one of the most famous kababs served in Iran’s restaurants. Usually, the term Chelow Kabab in Farsi is referred to as a dish of rice which is cooked in Chelow style and a Koobideh or Barg Kebab. It is one of the scarce foods that Iranians usually eat outside of the home. You can find this food easily in classic restaurants in every city of Iran. The most popular Chelow Kababy (Kebab restaurants) of Iran is placed in Tabriz, a city in the north-west of Iran. However, according to historians, the first of the kabab restaurant was in Tehran. Indeed, Iranians invented Kebab during the Qajar time, while Nasereddin Shah was the king of Iran. Therefore, the first Kebab shop was opened in Tehran’s Bazar. Shemiran Kebab shop was the first Kebab restaurant in Iran. In the past, when you entered Chelow Kebaby, they first served you a dish of Chelow along with a bar of butter. Then you could have as much as Kebab you wanted for a fixed price. Nowadays, they serve Kebab along with the rice, and you can have only one type of it according to your order. Moreover, the prices vary according to Kebab’s type. For instance, Kabab Barg is more expensive than Kabab Koobideh. Let’s learn to cook this famous Kebab at home.

Commonly, Iranians cook Kabab Barg with lamb. It is possible to use beef or chicken instead of lamb. The meat is marinated in a sauce to be tasteful and firm to attach well on the skewer. Iranians make different kinds of kebabs which include Kabab Barg, such as Kabab Bakhtiari which is a mix of Kabab Barg and Joojeh Kabab, or Kabab Soltani, which is a mix of Koobideh and Barg. If you go to a restaurant, they would ask whether you want Barg e Mamooli (regular Barg) or Makhsus Barg (special Barg), which usually contains more amount of meat. 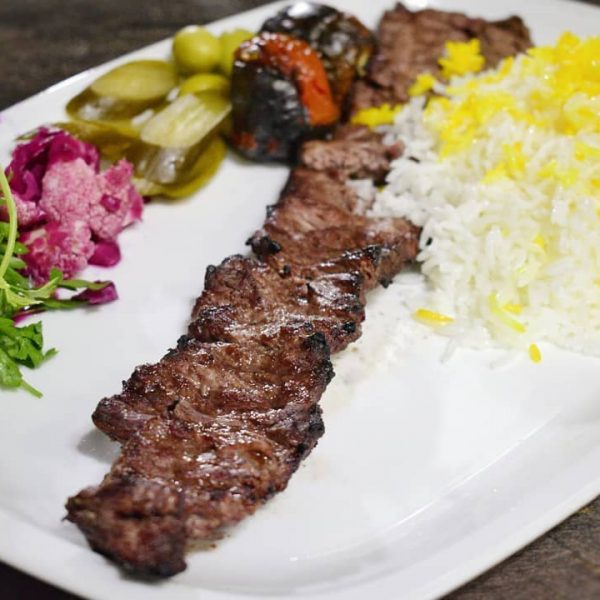 Persian cuisine has many kinds of Kebab. However, none of them is vegetarian or vegan. They always include meat as the main ingredient. As a vegan or vegetarian, you can enjoy the grilled vegetables next to Kebab, such as roasted tomatoes and roasted peppers.

Iranians serve Kabab Barg as the main course with Chelow (a dish of rice) and grilled tomatoes and peppers. Sliced fresh onions, sumac, a bar of butter, and salt are the side dishes, served next to Kabab Barg. A cup of light soup such as Soup e Jou, or creamy Persian soup can be the right appetizer for this food. A dish of lettuce salad, and Salad Shirazi, or some kinds of Torshi (ترشی) such as garlic pickles, or other types. All kinds of drinks are welcomed next to Chelow Kebab, however, Soda drinks such as Kola or other sweet sodas. However, Doogh (Persian yogurt drink ) is the best choice as a beverage. 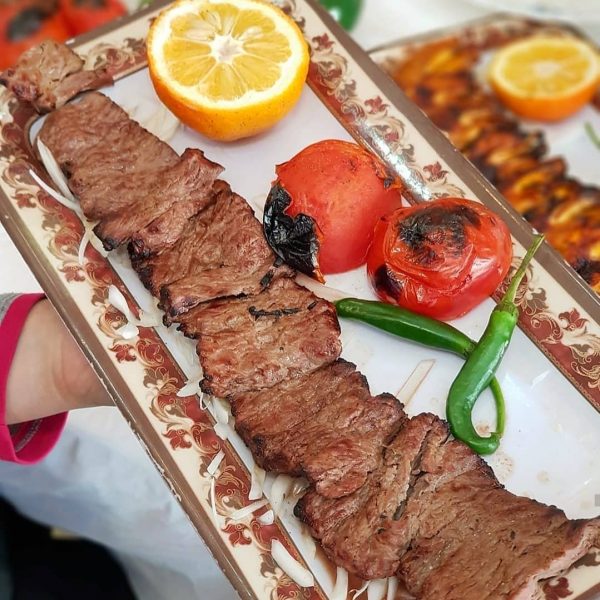 What are the ingredients of Kabab Barg?

The main ingredient is meat, beef or lamb or a mix of both of them. Moreover, you need vegetable oil, butter, ground saffron, and onions. The main point in cooking Kabab Barg is choosing meat. You need to find a roast lamb or beef with the best quality. If you select the meat correctly, you are halfway there.

Furthermore, you’ll need some salt and pepper to enhance the flavor. Note that you need skewers to cook Persian Kebabs. You also need to prepare a dish of Chelow, to serve the Kabab Barg with it. You may also need firm tomatoes and peppers to grill and serve next to your dish.

How to cook Kabab Barg?

To cook Kabab Barg, first, you need to wash and clean the meat thoroughly. Next, dry the beef utterly and place it on a flat surface. Mince the meat with a steak mincer, until it has about 4mm depth and about 15 cm width. Slice the onions and mix them with saffron, oil, and pepper. Then marinate the minced meat in the onion mixture for about 8 hours in the fridge. Take the meat out of the refrigerator; sparkle some salt on the meat. Attach the meat to the skewers. The length of your Kebab depends on your liking. Keep the skewer in your in one hand and the meat in the other one. Press the meat to the skewer until it sticks to it. Melt butter and mix it with some brewed saffron and polish the kebabs with it—grill (roast) the kebabs on coils or in the oven, or a barbecue. Serve them along with Chelow. You can attach tomatoes and peppers to skewers and roast them, too. Then serve them along with the Kabab.

This recipe is adequate for four people. The preparation time is 15 minutes (+8 hours), and the cooking time is 20 minutes. 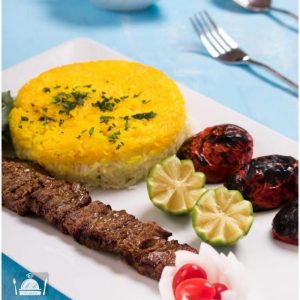 Kabab Barg is one of the most famous Persian Kababs. It is made with roast beef or lamb. Choosing the right type of meat is the essential aspect of cooking a good Kabab.
No ratings yet
Print Pin Rate
Course: Main Course
Cuisine: Persian
Keyword: Kabab Barg
Prep Time: 8 hours 15 minutes
Cook Time: 20 minutes
Servings: 4 people
Calories: 360kcal

For a crunchier taste, prepare the meat at least 3 days sooner and keep it in the fridge. The best meat for cooking Kabab Barg is lamb’s roast meat. You can use some spices such as nutmeg to soften your meat. Polish your kebabs with butter and saffron sauce for several times while being cooked.