Falafel (فلافل) is a traditional dish from the south of Iran. Falafel is an Arabic word for peppers. Since this food, is usually filled with peppers, Arab people call it Falafel which means full of chili. According to historians, this was a food that Egyptian Christians made for their ritual ceremonies. However, some others believe that it is only a dish that Arabs made out of peas and wanted to make like meatballs. This food was first originated in Egypt and then paved its way to Persian cuisine and other middle eastern cuisines.

It is a meatball-like dish that Iranians make a sandwich with it. In the past, it was only found in southern Iran, but nowadays you can find a Falafel shop in every town. It is not an official food and Iranians usually cook ad serve it for casual gatherings and picnics. It is an excellent choice for a picnic sandwich, brunch, a light workplace lunch, etc. if you are into spicy foods, or you like different types of sandwiches, read this article.

There are four main types of Falafel, depending on the region they make it. These types vary in ingredients. For example, the Bandari version has the most handful of ingredients and is the original type of it. Then, there is Falafel e Khuzestani that is the same as Bandari, but Iranians have added some elements to them. Falafel e Lobnanai is made in Lebanon and has lots of herbs and spices as ingredients. There is also another type of it commonly available in Iran’s other towns than southern ones and is made with more ingredients than Bandari and fewer ingredients than Lebonani. Falafel has a unique sauce that some of these types include it, and some others don’t.

Falafel has 238 kcal per 100gr. It has 25.75 gr carbohydrates, 8 gr protein, and 11 gr fat. Moreover, it has 4.62 mg vitamin E, 7.55 mg vitamin C, 36 mg vitamin B4, and small amounts of all other vitamins. Additionally, it contains 62 mg calcium, 48 mg magnesium, 166 mg phosphor, 320 mg potassium and 517 mg sodium. It also has notable amounts of other minerals such as ass iron and zinc. Because this food absorbs fat during frying, if you have high blood cholesterol, you should not eat it. Moreover, you need to notice that for a Falafel sandwich’s nutrition and calorie, you should add bread and veggie’s nutrition, too. 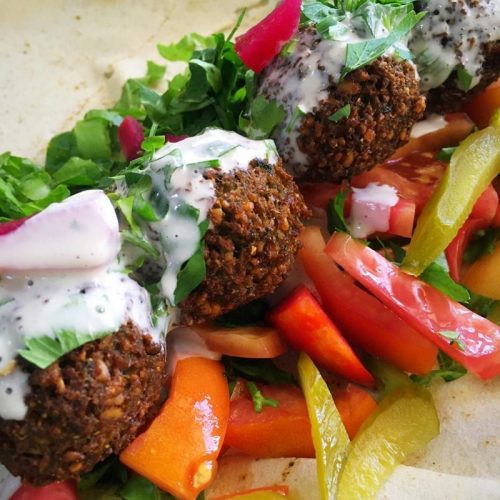 Many People refer to Falafel as Vegetarian meatballs. All types of Falafel have vegetable sourced ingredients. However, as a vegan, you need to replace eggs with something vegan, and you should be precise about the oil that Falafel has been fried in some recipes. If you are a vegan or a vegetarian, you can easily enjoy eating this food, or it’s sandwich.

Iranians serve Falafel as the main course for dinner or lunch. If it is served in smaller amounts, it can be used as a brunch or evening meal, too. It is the best option for a picnic sandwich. It is not an official food, but you can serve it in casual gatherings. You can serve Sabzi Khordan, Salad Shirazi(Persian cucumber salad), Torshi, and anything to your liking as the side dish. Nevertheless, Iranians make a sandwich with these meatballs and use fresh firm tomatoes and Khiarshoor (Persian pickles) along with some herbs such as parsley as the side components. You can serve this dish with any beverage. However, like always it goes best with Doogh (Persian yogurt drink). 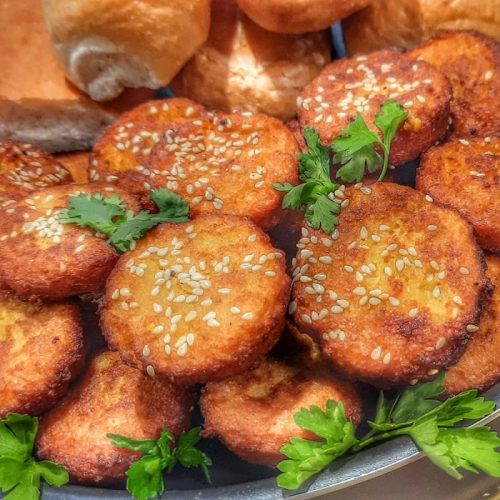 What are the ingredients of Falafel?

In this post, I am going to mention the recipe for Falafel e Abadani or Khuzestani, which is more common in Iran. The main ingredient is pea. Think of it as a meatball, that pea is going to play the role of meat. Moreover, you need to prepare onions and garlic. Some herbs such as parsley are required, too. Then, Falafel includes a significant number of spices, including salt, pepper, black pepper, Advieh Polow (Persia spice mix), cilantro ground, caraway seeds, and turmeric. Finally, you need a notable amount of vegetable oil to fry the Falafels.

How to cook Falafel?

To cook Falafel, ground peas along with garlic and onions and parsley. For better texture and less bloating, you’d better soak the peas 24 hours before. When the dough became ready add spices such as salt and pepper and other spices in the recipe. Make meatballs with the dough. If your dough is juicy, you can add some crunch powder to absorb its juice. Fill half of a pot with vegetable oil and fry the meatballs inside it. When the meatballs started to float on the oil, they are ready. Serve them along with pickles, firm tomatoes and ketchup sauce.

This recipe is adequate for six people. The preparation time is 1hour, and the cooking time is 30 minutes. You are required to prepare baguettes to make a sandwich with Falafel. 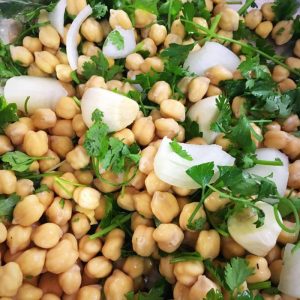