Barbari (Barbari bread, Naan Barbari, بربری) is a traditional Persian bread. It is one of the most commonly used bread in Iran. They both cook it using a conventional method and an industrialized method. In the traditional way, the baker places the dough into a gravelly heated oven, and the bread cooks on hot stones. In an industrialized manner, the baker uses modern ovens to cook it. Moreover, in cooking Barbari traditionally, the process of preparing the dough and placing it into the oven needs a lot of involvement of the baker. However, in industrialized methods, machines are responsible for most of the process.

The name Barbari has extracted from the word Barbar. Barbar refers to an ancient tribe that lived in the border of Iran with Afghanistan. When Qajars were ruling in Iran, some Barbarian people, cooked the first type of this bread in Tehran, the capital of Iran. Since it was very delightful and delicious, Iranians became a fan of it very soon. In about a year, it was being cooked all over the country. However, many people claim that it is more delicious in Tehran.

Persian cuisine has a variety of bread types since bread had played and plays a critical role in Iranians daily diet. However, the bread types themselves, don’t have much variety. Barbari has only one kind. Almost everywhere, they use the same ingredients and the same method in preparing their dough. However, you can experience different tastes due to some little changes. For example, one baker may add or sometimes fill the top of the bread with sesames. In the past, most bakeries used baking soda (sodium bicarbonate) in Iran. Nowadays, it is suggested to use less of it, so some bakeries have omitted it from the ingredients. However, many bakers believe that Persian bread owes their unique taste to baking soda.

To sum up, if you buy bread in Iran, you may be asked you want it with sesames or pure. You may also hear the word “Khashkhashi” in Iran’s bakeries. That refers to a well-cooked, crispy bread.

Anything made out of flour usually has a notable high amount of calories. Iranian bread has a high calorie, too. Each 100gr of Barbari contains 265 kcal, which is a high amount, even compared to Sangak or Lavash. If you are eating a portion of food because of its nutritions, Carbohydrates are the only nutritions that Persian bread can help you with. It contains 46 mg of Carbohydrates per 100 gr. It also has 36 mg of water and 8 mg protein. The only mineral that, this bread has is calcium. And vitamin B1 is the single vitamin available in this bread. 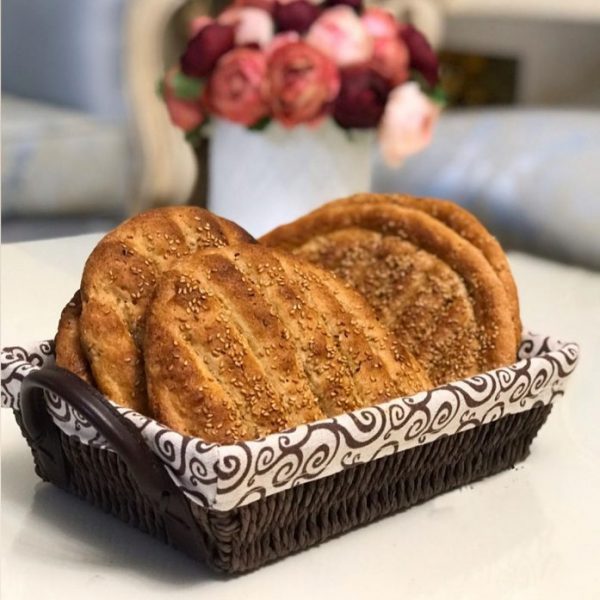 If you are a vegetarian or even a vegan, you can enjoy most of the Persian bread easily. Despite its Kebabs, the bread in Persian cuisine is prepared out of completely vegetable sources. Barbari is one of the most delicious and utterly vegetarian bread that everyone can enjoy.

Bread is an integral component of Iranians tables in breakfast. Moreover, they use bread while serving some dishes such as Boranis or Kookoos. In my opinion, Barbari is the most delicious bread; one could have breakfast. Its alluring taste and scent next to a bar of traditional Persian cheese feel like a miracle. It creates an exceptional feeling along with Lighvan cheese and walnuts. Slices of cucumbers and tomatoes are other side ingredients that can enhance a Brbari and cheese sandwiches taste. The best drink to serve, along with it, is tea.

An excellent choice for a more delicious brunch or breakfast is sweetened black tea. However, if you are going to serve this bread next to a dish, such as Dolma, the only thing you are required to do is to cut it into smaller pieces and serve it next to the food. It is essential to keep it in a container with a lid or inside a cloth to avoid drying. 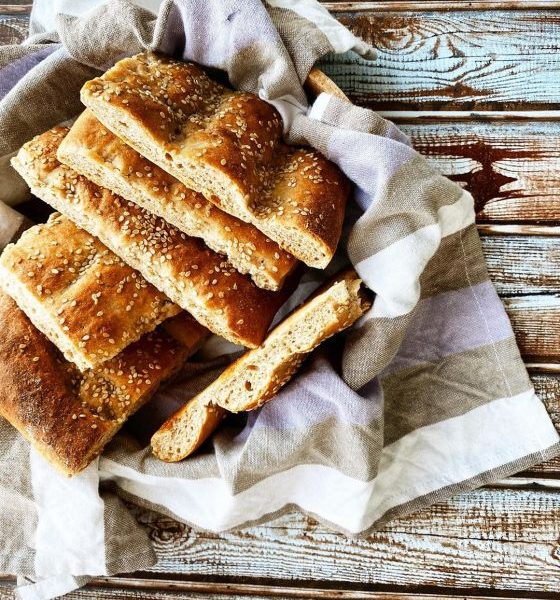 Like all kinds of bread, the main ingredient is flour. To cook Barbari at home, you need sugar, salt, baking soda, and active yeast. Another unique element, which Iranians only add to this bread is a flour treatment agent. It is an agent that improves baking quality. At home, you can omit this element, but most bakeries use it as well. The final ingredient that is optional to add is sesame; you can add sesame as a topping and its amount, all refer to you.

How to cook Barbari?

To cook this delightful Persian bread, you should mix, sugar, yeast, salt, and water together. If you are going to use a treatment agent, you can add it at this point. Then you add oil and baking soda. After all auxiliary ingredients mixed, it is time to add flour merely. Step by step, you must bolt the flour and add it to the mixture. You should add flour to the point where the dough doesn’t stick to your hands. Then you must let the dough rest in the fridge for about 1.5 hours.

After the dough rested, it is time to separate pieces of it (about 20 gr each time) and flatten it with a roller. Finally, you sparkle some sesames and put the flattened dough in the oven. After 20-30 minutes, your Barbari is ready.

This recipe is adequate to make two Barbaris in ellipse shape. You can cut ten 4-inch size slices of bread out of them. The preparation time is 1hour and 45 minutes, and the cooking time is about 30 minutes. 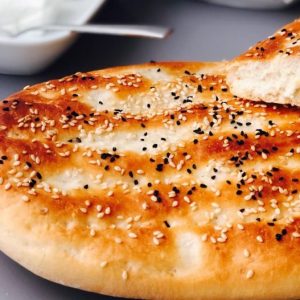